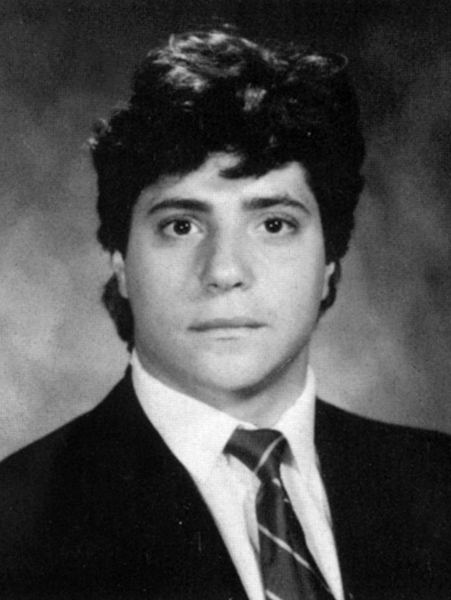 “The nature of man is freedom.” These were words that Nicholas J. Visconti chose to accompany his senior portrait in the 1988 Ramkin. Whether or not the boy from Crestwood knew it then, he was tapping into something that must have resonated deeply within him.  Consciously or unconsciously, in choosing that quote, Nick was no less than declaring what would become his credo and his life’s mission: to ensure, protect and defend that intrinsic and inalienable right to freedom wherever it is threatened.

Nick Visconti was born in the Bronx in 1970, the third of the four sons of Nicholas Joseph Visconti and Carolyn Rocci Visconti. His parents were the owners of a contracting company — his father knocked down the walls and his mother kept the books. The family lived on Manhattan Avenue in Crestwood where Nick attended the Annunciation School and served as an altar boy for the parish.

While the rest of the Visconti boys —Joseph, Lewis, and David — attended Iona, Nick arrived at Fordham Prep in August of 1984 for football practice, beginning his career at Rose Hill a few weeks before the start of the school year. As was the custom then, in September he reported with the rest of the freshmen to Collins Auditorium for their first day of orientation, where he was sorted into Mr. Patrick Conway’s mentor group.

During his Shea Hall years, Nick was a member of the Italian Club. He also wrestled (Hall of Honor inductee Fr. Russell Sloun was the wrestling moderator), worked with the business staff of the Dramatic Society, and occasionally lent some muscle to the Prep stage crew. But first and foremost, Nick played football: #45 — left defensive tackle and backup fullback.

Visconti remained at Fordham University for college, majoring in political science and classics, graduating on the Dean’s List in 1992. During these years, Nick was a competitive weightlifter, lifting in the NYC Regionals, the Empire State Games and the American Open. It was also during these years that he dated his future bride, Christine Azzinaro, a fellow Fordham alum, Class of 1993.

Following his Fordham graduation, Nick Visconti joined the United States Marine Corps. He was admitted to the USMC Officer Candidate School, graduated with the rank of second lieutenant and served on active duty for three years. He returned to civilian life as a reservist in 1996 to launch a career in pharmaceutical sales.

After the terrorist attacks on the United States on September 11, 2001, 2nd Lt. Visconti felt it was his duty and obligation to return to active duty, and was deployed to Iraq as part of Operation Enduring Freedom. During his first tour, he served as commander of the 81mm Mortar Platoon, Weapons Company, 2nd Battalion, 25th Marines and was promoted to the rank of major. He began his second tour in Iraq as executive officer of Company E, 2nd Battalion, 25th Marines in the Dhi Qar province.

It was during his time in Dhi Qar that the boy from Crestwood proved beyond question his commitment to his country, his troops and the Iraqi people. Besides leading combat operations and patrol missions, he was instrumental in rebuilding over 125 schools and municipal buildings, ended the looting of irreplaceable Babylonian and Sumerian artifacts, helped to reorganize and retrain local police and rescue departments and worked as interim governor of the northern section of the province to ensure freedom and improve the quality of life in the area. So respected was Maj. Visconti for his service to the people of the region, that he was praised by Iraq’s Ministry of Culture, and was in gratitude granted the honorary title sheik by the locals.

Visconti continued to distinguish himself as commanding officer of Company I, 3rd Battalion, 25th Marines in 2004, and again in 2008 as the operations and intelligence officer for the US Marine Corps Combat Logistics Battalion 46 in the Al Anbar province of Iraq. His service during this tour was summarized by his superiors as “a rock solid performance in a demanding, operational environment,” and he was commended as “an exceptional leader who displayed the ability to excel during a fluid and challenging time.”

Nicholas Visconti was promoted to the rank of lieutenant colonel in August 2009.

Lt. Col. Visconti has since headed the US Marine Corps Forces, Central Command, Material Fusion Center in Bahrain, and has served as the logistics operations officer for the entire US Marine Corps out of MacDill Air Force Base in Tampa, Florida. Currently operations officer for the 4th Marine Logistics Corps, he continues to work to protect and serve the American people, but also to bring freedom and justice to other places in the world.

A highly decorated officer, Visconti has scores of commendations to his name. Among his many citations are the Combat Action Ribbon, the Iraq Campaign Medal, the Global War on Terrorism Expeditionary Medal and the Navy & Marine Corps Overseas Service Medal.

In the words shared by a Prep brother from the Class of 1988:

While so many of us have had the good fortune to raise families, participate in our children’s daily lives, go back to school for graduate degrees and build careers in our respective industries, Nick has sacrificed almost all these things. His service has taken him away from his family on many occasions — holidays, birthdays and so many celebrations. Nick had begun a successful career in the pharmaceutical industry, but he gave up this civilian career in order remain with the Marine Corps, to protect our country and to advance the cause of justice on a global scale.

Nick and Christine Visconti call Connecticut their home. They were married in 1996 at the University Church and have four children: Noelle, Nicholas James, Jr., Alexandra and Paulina.

Lt. Col. Visconti is currently stationed at the US Marine Corps Support Facility in New Orleans, Louisiana and is pursuing a degree in Ops Management at the University of Arkansas and a Lean Six Sigma Black Belt Certification.