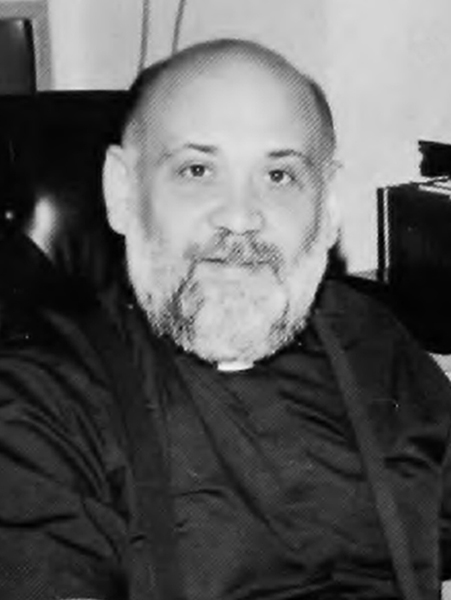 His eyes seemed to emanate the gravity of some ancient Greek saint — stoic and sublime, sacred and serene. Two and a half minutes in his presence, however, were all it took to know that Fr. Sloun’s brand of reverence resembled less the imperturbability of a venerable icon than the antics of some overgrown cherub comically suspended on impossibly tiny wings. With Fr. Russell Sloun, intensity and transcendence were always served up with a side dish of lightness and laughter.

Russell John Sloun was born on May 4, 1943 and was baptized in the Orthodox Church on the 4th of July. He grew up in Brooklyn, New York and had one sister, Elena. Their father was Robert Sloun who served overseas during World War II and was something of a part-time musician. His mother, Sultana “Tania” Stavrianopoulas Sloun, had grown up working in her family's flower business, but eventually became an accountant. Russ’ mother raised him dotingly on Avenue T, and it was she who saw to his education at Brooklyn Prep, from which he graduated in 1960. Later on, Tania would remarry. Her husband, David Fishman, a Jewish taxi cab driver from Astoria, Queens, could not have been prouder of his Eastern Orthodox son who would eventually wind up a Roman Catholic Jesuit. As Russ himself often recounted, family seders were always warm and loving and holy and very, very entertaining.

During his years at Brooklyn Prep, Russell was a four-year debater, served on the school’s Honor Guard, and was a member of the French Club — no surprise for the future enseignant de française. It was also during high school that he would discern his calling, entering the Society of Jesus shortly after graduation on August 14, 1960 at Bellarmine College in Plattsburgh, New York.

Someday, when the hagiographers conspire to write St. Russell’s acta, they will likely note that during his time in the novitiate, as he wrestled with whether or not he should continue in the Society, Sloun would receive what he would later describe as nothing short of a mystical experience. Down through the ages, the blesseds have described these visions variously — voices from on high, flashes of resplendent light or angelic beings descending from beyond time and space. As for Russell, his was more of the porcine variety.

With much on his mind and doubt in his heart, Sloun was sent out by the novice master for a long walk to consider the direction of his life. In Russ’ retelling, it was the hottest day of the decade. An hour or so into his sweaty stroll through the farm country along the Canadian border, the boy from Brooklyn was ready to give up — physically, mentally and spiritually. He sat in the road and resolved to go no farther. Just then, looking up, he saw her: wonder of wonders and miracle of miracles — a pig of impossibly monstrous proportions. As her eyes met his beneath the blazing sun, the sow began to charge. Running the only ten-minute mile of his life, Russell made it back to Bellarmine utterly winded, but otherwise unwounded.

Racing towards the novice house, Russell Sloun came to three very powerful realizations that day, revelations that would inform his priesthood and pedagogy for the rest of his career. First, he knew that he had been on the right path all along — there was no time for sitting in the road. Second, he saw that with faith and trust in his Heavenly Father, he could endure more than he ever imagined he could — a lesson he would share again and again with the many young men he would teach in his lifetime. And, finally, he was reassured that the Lord had one wicked sense of humor.

So Russell Sloun stayed to complete his studies at Plattsburgh, moving on in 1964 to Loyola Seminary in Shrub Oak, New York for the philosophate portion of his formation. In 1966, he returned to New York City to teach French at Xavier High School and work towards a graduate degree in French at NYU. Mr. Sloun, SJ remained at Xavier for three years before leaving to complete his theological studies at Woodstock College.

Fr. Russel Sloun was ordained at the University Church on May 26, 1973 by Terence Cardinal Cooke.

For the next fifteen years, Father taught French at Fordham Prep with affabilité, une joie de vivre and — bien sûr! — a bit of wackiness — but always with great care and concern. While chairing the Modern Language Department, Fr. Sloun also taught Latin and coordinated vocation and marriage seminars for the Prep seniors featuring couples from the Long Island Marriage Encounter, a ministry to which he was dedicated for many years. The Speech and Debate Team, Rampart, and even the Wrestling Team: each would thrive at one time or another with Father as moderator, as would the then-fledgling Fordham Prep Model Congress.

And, of course, on some (not so) far off digital day, the Prep will look back and trace its hi-tech heritage to Fr. Russell Sloun and a chance game of Space Invaders on a first generation Atari computer. Together with Nick Lombardi, Fr. Sloun not only ushered in the digital age at Fordham Prep, but, as early as the mid-1980s, he had actually brought the school to international prominence for its revolutionary use of computers in an educational setting. Less than a month after their venture into video gaming, Sloun had already envisioned classroom applications for the system, and Lombardi had taught himself BASIC. As they got the computer lab up and running, articles began to appear in The New York Times, New York Magazine and trade journals nationwide. Curriculum designers from as far away as Japan were arriving at Rose Hill to poke around the Prep and see what this emerging technology had to offer.

In 1985, Fordham Prep appointed Sloun to the Office of Assistant Headmaster. He held that position for three years before the Jesuit provincial requested that he return to West 16th Street where he had begun his teaching career decades earlier. As beloved as Father had been at the Prep, so too he would be downtown, as an assistant headmaster through 1990, and then as a teacher, moderator and founding director of Xavier’s Computer Center. All the while, he remained involved with both the Prep’s and Xavier’s retreat programs, making the trips to Esopus-on-Hudson or to Mt. Manresa on Staten Island to share his deeply moving stories of faith and hope in the immensity of God’s love.

Russell Sloun, SJ passed away without warning on February 2, 1998. He was 55 years old. Though he had been managing health issues, it was an unexpected reaction to an over-the-counter remedy that tragically lead to his sudden death. Like everything else about him, Fr. Sloun’s funeral was larger than life. The Church of St. Francis Xavier was filled to capacity for his funeral mass — family and friends, brother Jesuits, scores of colleagues and hundreds and hundreds of students, current and former, from both Fordham Prep and Xavier. In the words of Michael McCafferty, Xavier Class of 1998, one of Father’s students at the time of his passing, “There was palpable excitement when you entered his class; something remarkable was always about to happen. Avuncular, loving, endearing and capable of eliciting a belly laugh from the most stoic of students: Fr. Sloun will be missed and remembered always by all those who were fortunate enough to have known him.”

On the Church calendar, February 2 is celebrated as Candlemas, or the Feast of the Presentation. In the Orthodox Church of Fr. Sloun’s baptism, however, the feast is known as The Meeting of Our Lord, God, and Savior, Jesus Christ — fitting for Russell’s passage from this world to the next. And yet, in keeping with his character, Father would likely have been the first to point out that it was also Groundhog Day, and so luckily — he would have built to his punchline — he was getting away easy with only six more weeks of Purgatory.

Finding God — and a good laugh — in all things, even the difficult things, even the things that sometimes seem beyond all comprehension: this was how Fr. Russell Sloun lived his life, and this was the lesson and legacy he has left behind.