Over the weekend, the AquaRams travelled to Buffalo NY to compete in the New York State Swimming and Diving Federation Championships. For two days, the meet was filled with the best competition of high school swimming and diving in the state of New York and similar to past years, the Fordham Prep swimming team did not disappoint as they captured an impressive 2nd place finish overall just 12 points from 1st place!

Freshman Nick Torres also led the team with top finishes in his events including 5th place in the 200 individual medley of 1:52.64 just off our team record and 2nd place in the 100 backstroke 51.21!.

Other great individual performances were turned in by Aristides Speres in the 100 butterfly 51.51.45 along with Ryan Mairele and Stephan Gray in the 500yd freestyle coming in at  4:49.12 and 4:49.27 respectively. Gray also was nominated for the sportsmanship award of the meet for the Catholic High School Section.

In the relays, the team of Aristides Speres (46.41), Alec Nicaj (47.35), Nick Torres (45.81), and Spencer Lafata (46.10) captured 1st place in the 400yd freestyle relay for the 5th year in a row with an automatic all american time of 3:05.67, less than a second off the state record which is also held by Fordham Prep. In addition, the team of Nick Torres, Charles Lazaroni, Aristides Speres, and Alec Nicaj placed 5th overall in the 200medley relay and 4th in the  200freestyle relay with Speres, Francis Moran, Lafata, and Nicaj.
Congratulations to the team on a fantastic meet and conclusion to the season! 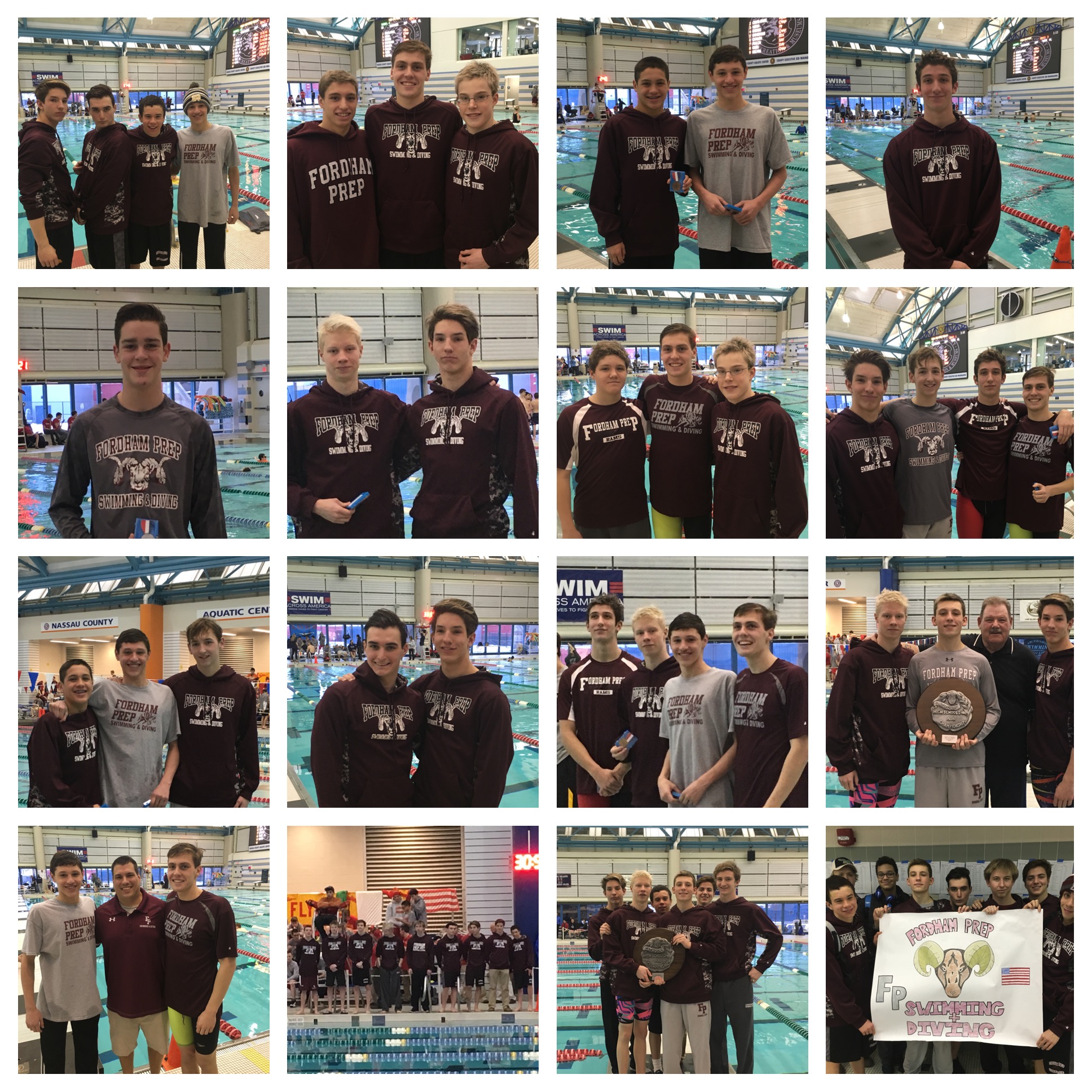 The Fordham prep swim and dive team concluded their CHSAA season on Sunday evening. The three day meet saw incredible competition throughout. Thursday evening the divers got the team some early points taking 2nd, 13, 18, and 19th. Saturday during the swimming trials the team placed themselves in a great position for sunday's finals, with all swimmers turning in best times of the season. Sunday's finals started with the 200 medley relay 1st through third place teams sepersted by less than a second. Through the next 5 events the lead changed hands between the Prep and two other teams multiple times. Prep swimmers Spencer Lafatta and Nick Torres were crowned individual champions in the 200 freestyle and 200 individual medley respectively. After the diving the top three teams were sepersted by only 11 points. Through the final 6 events the Aquarams continued to turn in top swims with Spencer Lafata winning the 500 freestyle, Nick Torres the 100 Back, and the 400 relay of Aristides Speres, Allan Cooke, Nick Torres and Spencer Lafata winning the final event. As the dust settled and the final score was announced the Prep had been crowned 2016 CHSAA runner ups. Congratulations to Stephen Gray, Ryan Maeirle, Allan Cooke, Charles Lazaroni, Aristidies Speres, Spencer Lafata, Nick Torres and Alec Nicaj all turned in State Championship qualifying times and will represent he Prep at the New York State Federation Championships. Congratulations to all Prep Swimmers and Divers on an excellent season!

The Fordham Prep Swim and Dive Team concluded their duel meet season Monday evening against this years league powerhouse St. Anthony's.  What was billed to be a competitive and exciting meet surpassed all expectations.  The Aquarams turned in fantastic swim after fantastic swim, winning the first 3 events and going into the one meter diving tied 31 to 31.  The back and forth continued after the diving with St. Anthony's and the Prep swapping slim leads after each event.  Going into the final event, the 400 yard freestyle relay, the Aquarams had a slight 2 point lead.  After the final touches, in what was the most exciting race of the season, the Prep came up just a tad short, conceding victory to the Friars by 2 points. The team has much to be proud of at the conclusion of the duel meet season, many swimmers and divers turned in their best performances of the season on Monday and are looking to use this momentum to catapult them even further in the CHSAA Championships that are scheduled for February 4th, 6th and 7th.  Outstanding performances were turned in by Aristedes Speres, Jared Copeland, Frankie Moran, Nick Torres, Stephen Amato, Steven Gray, Alec Nicaj, Nick Malloy, Trevor Sermon, Chris Bennianti, and Spencer Lafata.

Kudos to all swimmers and divers for an excellent duel meet season, and to the Class of 2016 Aquarams completing their duel meet careers 39-1.  Good Luck at Championships!

On Tuesday, December 22nd the Prep Swim and Dive Team had one last task to take care of before winter break.  Set for a show down with school rival Xavier, the team was committed to continuing their undefeated season moving into the holidays. Several fantastic swims were turned in highlighted by Aristedes Speres, Spencer Lafata, Alec Nicaj, Brian Chrystal, Trevor Sermon, and many more.  The team jumped out to a quick lead, and was able to maintain and build winning some exciting races along the way.  The team looks forward to capitalizing on its winter break practices at their next meet, against Xavieran on Tuesday, January 5th at the Fordham University Pool.  All are welcome to come and cheer on the team. Good Job and Good Luck to all Aquarams!

The Prep swim and dive team welcomed the terriers of St. Francis Prep to the Rose Hill campus.  The Aquarams snapped to a quick start sweeping 1st, 2nd, and 3rd place in the meet's initial event, the 200 yard Medley relay.  The second event saw Freshman Nick Torres win the 200 yard freestyle, followed by Junior Spencer LaFata in the third event, the 200 yard Individual Medley, also capturing 1st place.  Seniors Alec Nicaj and Brian Chrystal continued the winning ways securing the prep's 4th and 5th wins in the 50 and 100 yard freestyles. The team went on to win each of the remaining 8 events and the overall meet 93-67.  Outstanding swims were also turned in by some younger members of the team when Freshmen Andrew Wetty, Chis Garcia and Sophomores Daniel Masseo, Ryan Garvey, Lukas Petit all made their A-championship qualifying times.  The team looks forward to continuing its season against Molloy, on Monday December 14th.  Congratulations to all Swimmers and Divers on a job well done!

Sunday evening the Prep Swim and Dive team swam Staten Island powerhouse St. Peters.  The Aquarams got off to a quick start taking first and second place in the 200 yard medley relay, and continued their winning pace for the remainder of the meet.  The Prep won every event, including sweeping the 1 meter diving. Alec Nicaj, Michael Filaridi, Jalen Ramjohn, Chris Benninati, Brian Chrystal, Stephen Amato, Dylan Walsh and Mike Marun all turned in great swims. Congratulations to freshman Austin Hourican, Luke Rosato, Jared Copeland, Ryan Maierle, and Nick Torres all who made their Varisty A-championships cut.  The team looks forward to the annual Relay Carnival on Tuesday evening.

The Prep Swimming and Diving team kicked off its variety season Thursday night welcoming St. Dominics to the University natatorium.  The team got off to a quick start sweeping the 1 meter diving and the 200 yard medley relay event, and continued to its fast pace throughout the night.  Junior Spencer Lafata won the 200 yard freestyle in a New York State Championship qualifying time of 1:45.34 seconds.  Alan Cooke, Trevor Sermon, Frankie Moran, Aristides Speres, Ryan Maierle, Jared Copeland and Nick Torres also turned in excellent swimming performances.  The team has a quick turnaround for its second meet as they look to take on St. Peters High School, Sunday at 5:30pm.  Congratulations to all swimmers and divers on a great first meet! 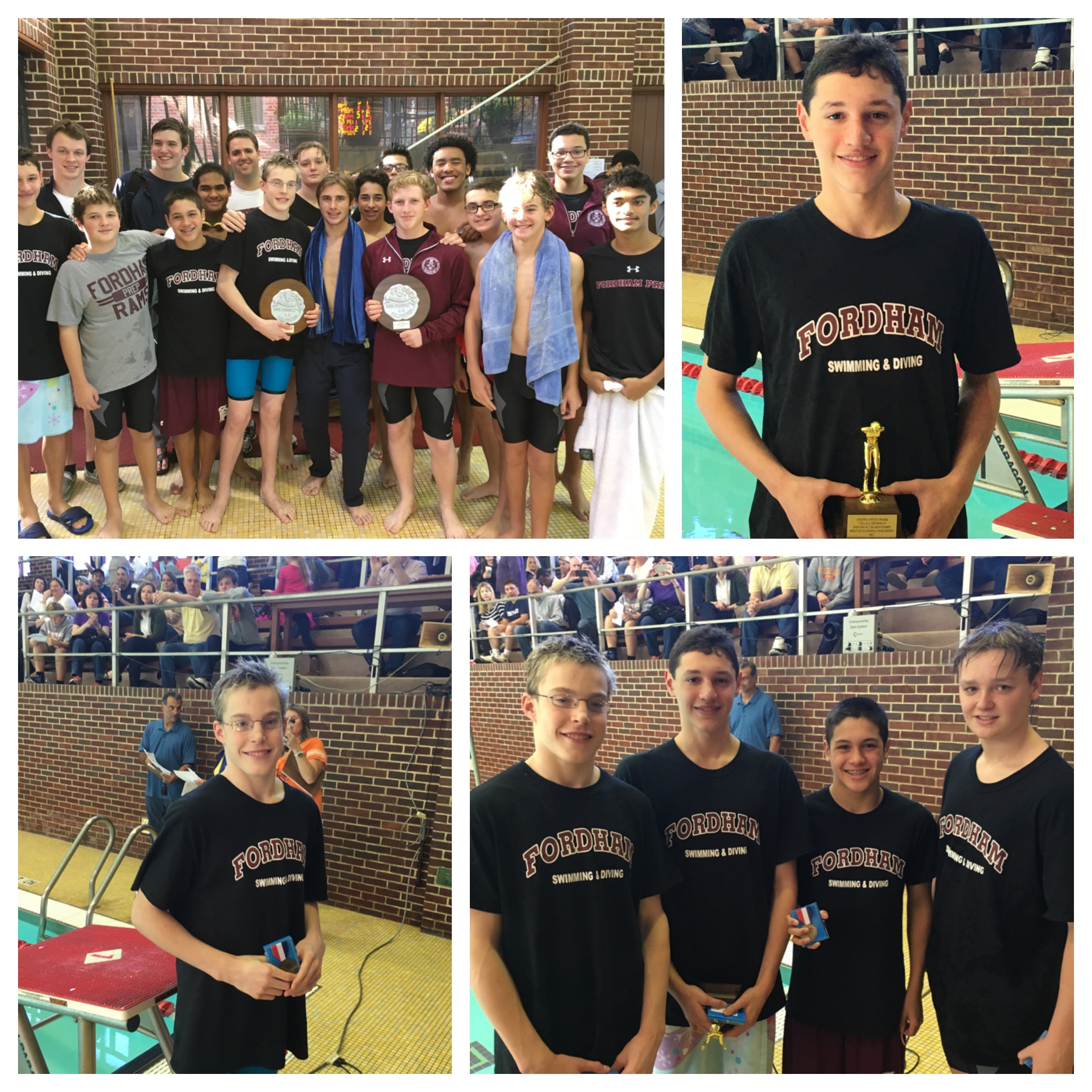 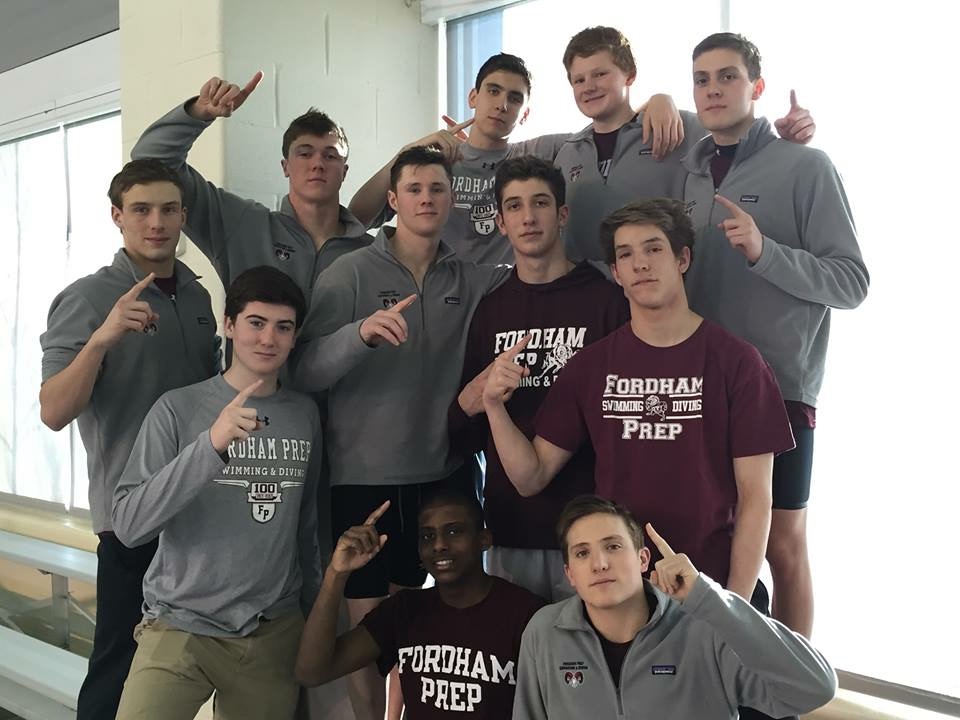 <Back to News
Leadership Donors Honored 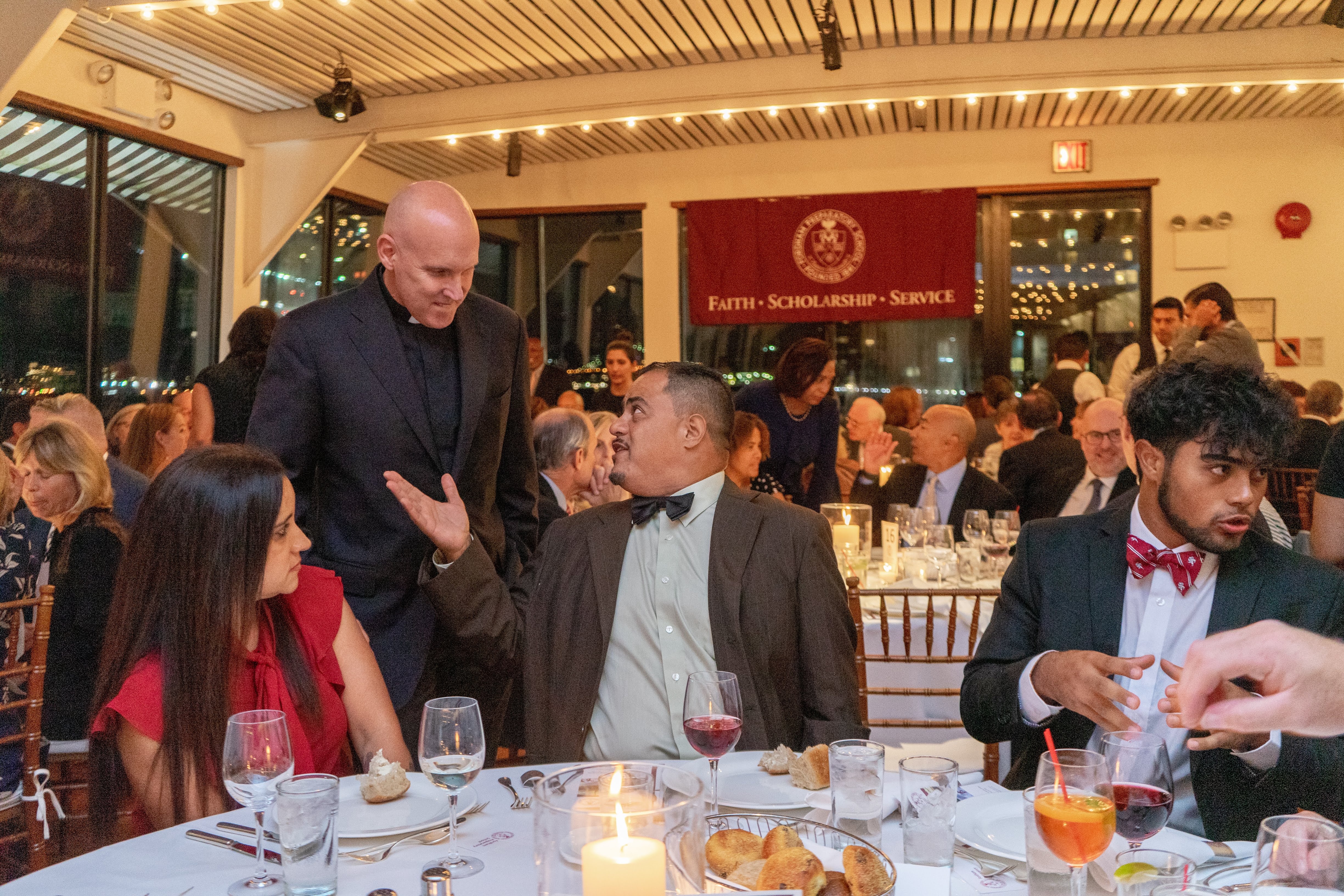 Nearly 200 Annual Fund leadership donors gathered at The Water Club, located along the East River in Manhattan, and were thanked for their generosity last Friday evening. The evening was highlighted by Fordham Prep senior Max Maldonado reflecting on his experiences at the school and how his time at the Prep has helped him form bold goals for his career and his life. "I know that if I work hard, my hopes and dreams for the future can become a reality.  I also know that without the education I'm receiving at the Prep, my reality would be very different. So, thank you for supporting the students of Fordham Prep and for giving me this opportunity tonight to share a little of what life is like at the Prep today," said Max.

Philanthropy, including The Annual Fund and the Igniting Our Mission Campaign, directly benefits our students every day - through our robust tuition assistance program which awards financial aid to 45% of our student body, support of our Global Education Program which gives students the opportunity to serve and study on six continents, through our new iSTEAM program where students will learn to push the boundaries of technology, and the completion of the East Wing Project which will physically support Fordham Prep students for years to come.

"I would like to echo Max, and thank you again for your incredible generosity to Fordham Prep, which enables us to offer programs to our deserving students," said Fordham Prep President Rev. Christopher J. Devron, SJ at Friday's event.  Fr. Devron shared with the audience the profound impact of the school's Igniting Our Mission capital campaign which has raised nearly $50 million since 2015 to advance the Prep's mission in dramatic ways.  "Thanks to all of our supporters, Fordham Prep has a bright future." 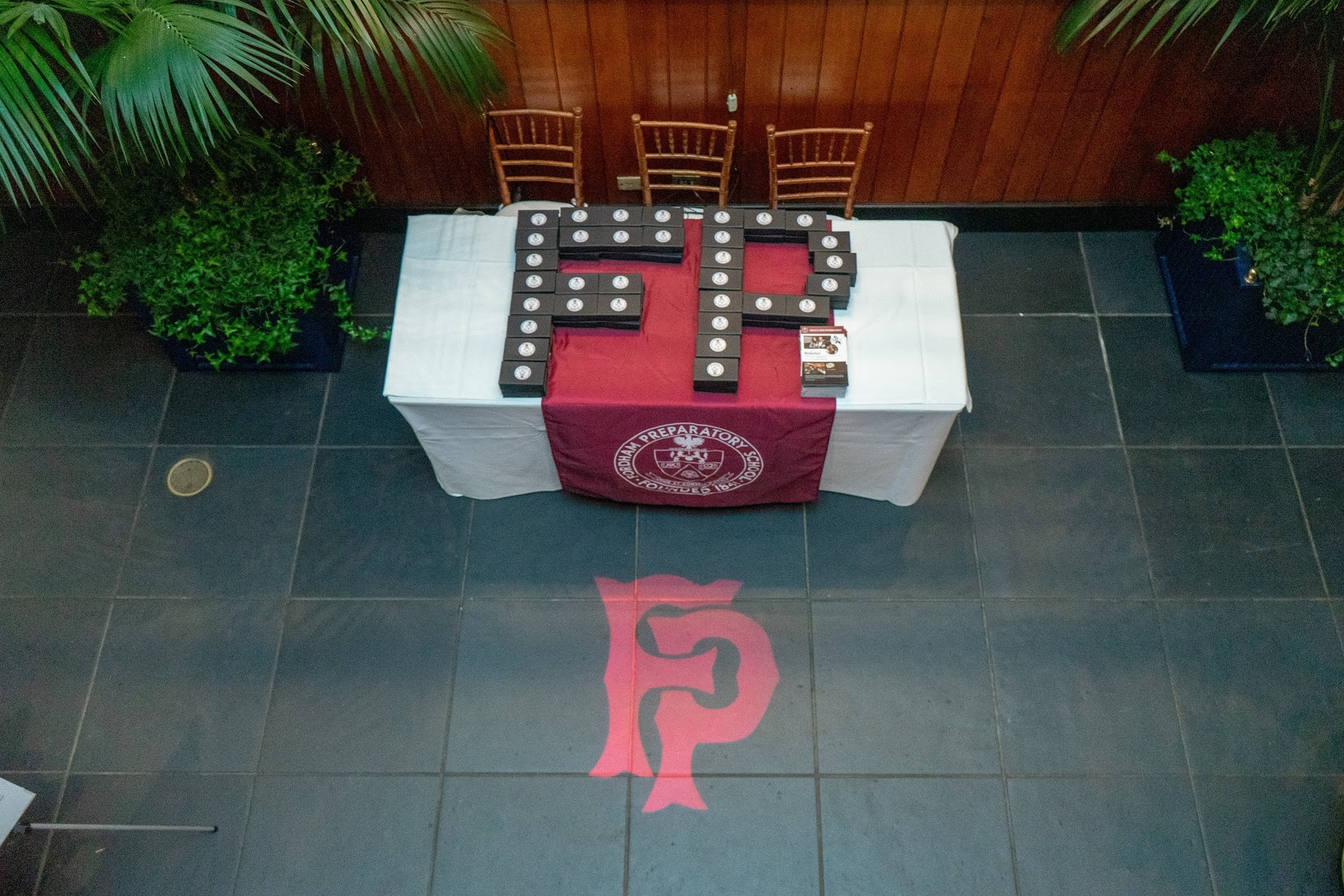