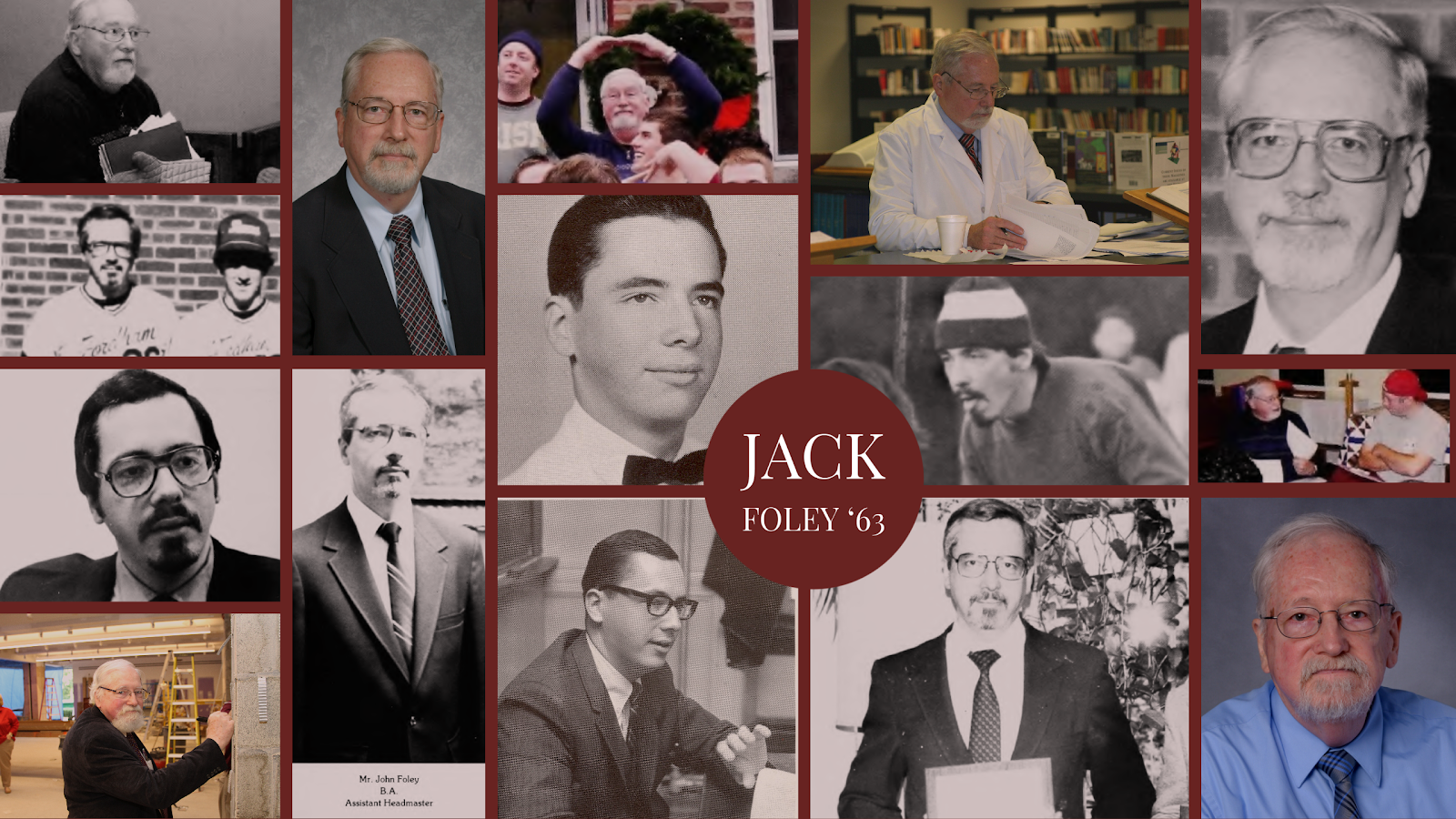 “Jack Foley is the memory and the conscience of Fordham Prep. It may not be from Plutarch, but Shakespeare is close enough: When comes such another?”

Strong words, but when Dennis Ahern ’63, Fordham Prep’s Assistant Principal for Professional Development & Supervision, utters this statement about his classmate and long-time colleague, he is speaking for thousands of Fordham Prep alumni, parents, faculty & staff members, and friends who have encountered Foley since his teaching days started in 1967. 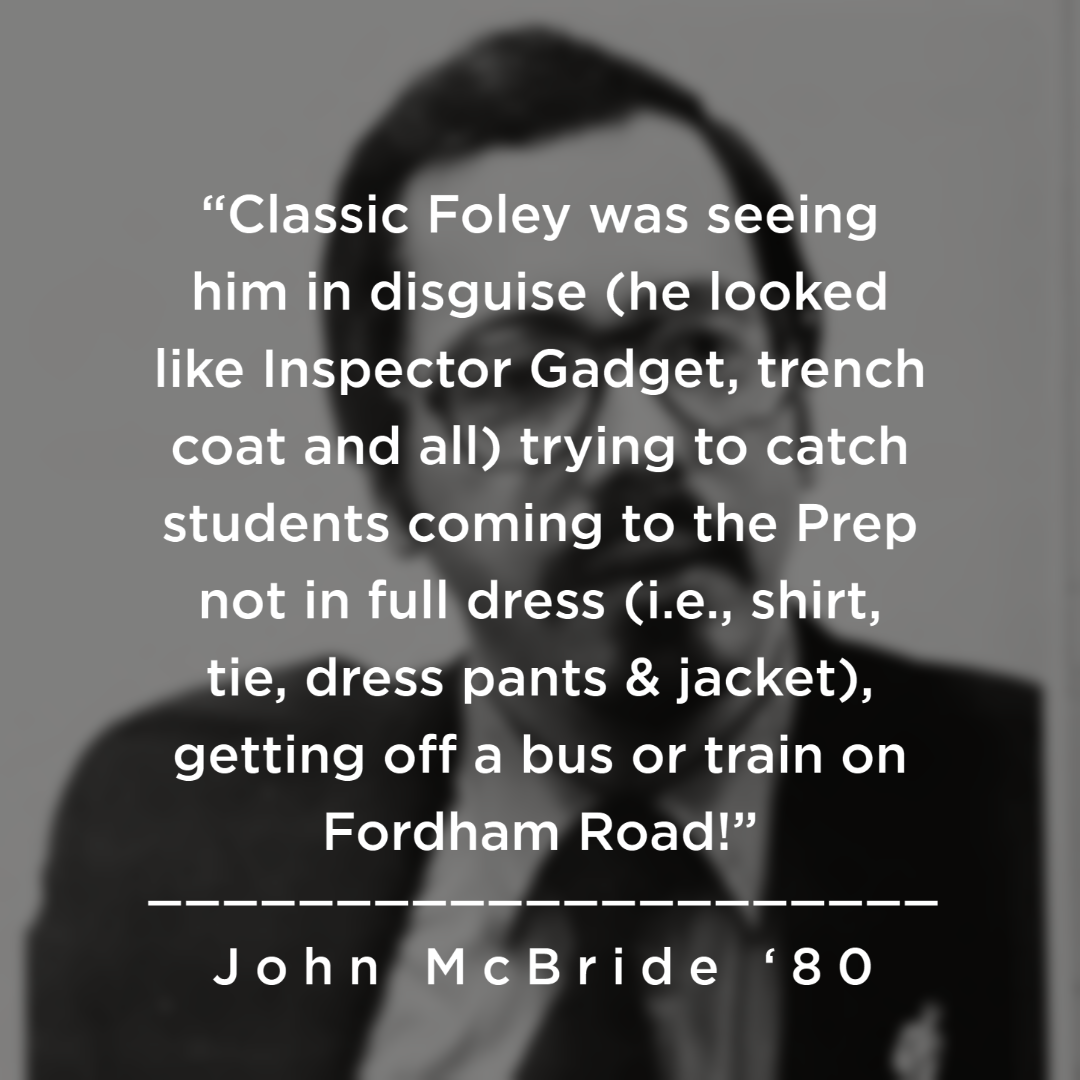 In late April, Foley announced his decision to retire from teaching, effective at the end of the 2019-2020 school year, concluding a 53 year career at his alma mater. Counting his high school and college days, this September will mark the first time since 1959 that Jack Foley will not be present on Rose Hill - a 61 year streak snapped. He (and his fellow longtime colleagues Fr. Stanley O’Konsky, SJ and Anthony Tartaglia) served as the bridge between Prep teaching legends Fr. Arthur Shea, SJ, Harry McDonough, Charles DaParma ’45, Frank Holbrook ‘45, and Ed McHugh ‘39 to those in this generation.

When asked to write or speak about Jack Foley, alumni and colleagues were quick to respond.

“I met Jack Foley in 1975. He was the Dean of Students, and if he wasn’t catching me running in the hallways, he was helping with strange Greek verb forms. I remember being amazed that he always knew the answers.

Flash forward to the early 90’s and Jack was interviewing me for a position in the Classics Department. He said I would be teaching some Latin 1s and a section of Greek 4 Honors. He sat back and watched my reaction. I guess I showed the correct mixture of fear and excitement because he hired me.

Jack Foley is a gentleman and a scholar, a true son of Fordham Prep, beloved by hundreds of students and staff, and we are all blessed for having known him.” - Christopher Lauber ‘79, Classics teacher, Fordham Prep 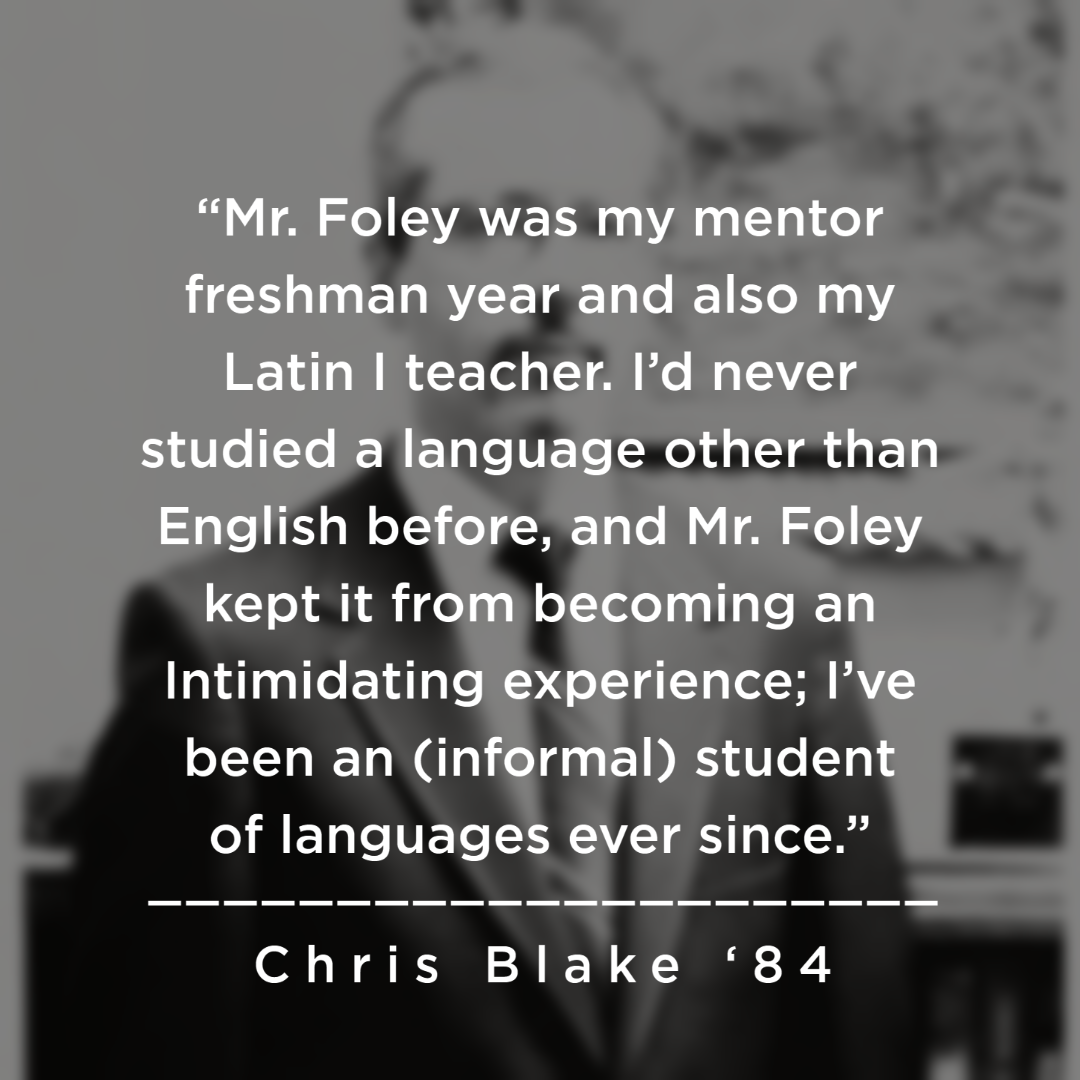 “Mr. Foley was my mentor freshman year and also my Latin I teacher. I'd never studied a language other than English before, and Mr. Foley kept it from becoming an Intimidating experience; I've been an (informal) student of languages ever since.” – Chris Blake ‘84

“Classic Foley was seeing him in disguise (he looked like Inspector Gadget, trench coat and all) trying to catch students coming to the Prep not in full dress (i.e., shirt, tie, dress pants & jacket), getting off a bus or train on Fordham Road!” -John McBride '80

“Mr. Foley was my sophomore year Latin teacher back in the fall of 1967. It was his first year teaching and he was always upbeat, easy-going and positive. He managed to take a difficult language that many students found intimidating and made it humane. Anytime you asked Mr. Foley for something - academic help, supervising an activity - he always said yes. When I became a teacher, I tried to remember how Mr. Foley treated his students. I saw him a few months ago, and over 50 years later, he still remembered my name and knew what I was doing. Thank you, Mr. Foley, for your kindness, dedication, and service!” - Vinny Castellano ‘70 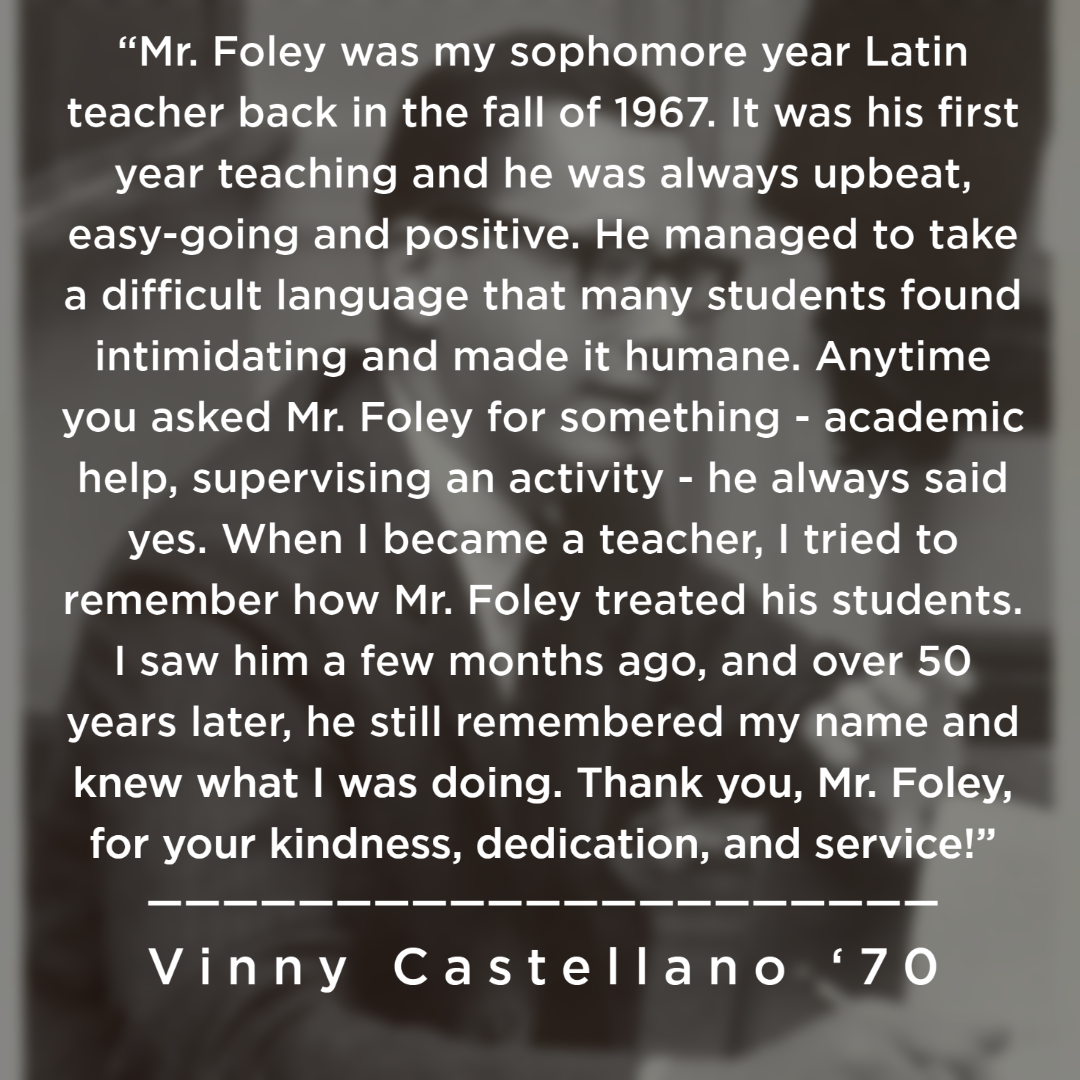 In October 2016, Foley was recognized at the Fordham Prep Faculty Convocation for the start of his 50th year in teaching. During the ceremony, Fordham Prep Principal, Dr. Joseph Petriello ’98, shared a few words about the man who has impacted so many at the Prep.

“Jack graduated from the Prep in 1963 and went on to study at Fordham University, where he majored in Classics. Upon graduation in 1967, he began teaching at the Prep, right out of college, and among the inspirational laymen and Jesuits who formed him as a young man of conscience, competence, compassion, and commitment.

For five decades, Jack has taught Latin and Greek in the Classical Languages Department, championing the heart of the Jesuit academic tradition here at the Prep as he guided generations of young men through the writings and wisdom of the ancients. Affectionately known to his colleagues as ‘Captain Jack,’ he has been and continues to be a truly beloved member of the faculty, a man whose generosity, gentleness, and honesty is a reflection of all that is good and true about what it means to be Jesuit educated and what it means to live one’s vocation as an Ignatian educator throughout a long and storied career and lifetime.

As one of the few members of our faculty who had the privilege of teaching in both Hughes Hall and Shea Hall, Jack has served the Prep in so many significant ways. He was the Dean of Students from 1975 to 1978 and held the office of Assistant Headmaster from 1982 to 1985. Jack has coached baseball and football, and moderated a wide variety of clubs, including the glee club, and most recently the Anime/Trading Card Club for the past 20 years. He also served for many years as the faculty representative on the Board of Trustees. Currently Jack is a steady presence on the Teacher Relations Board, the Academic Committee, and the Diversity Committee. He continues to share his wisdom and grace with students on Emmaus Retreats and as a Christian Service teacher for seniors.

One of his colleagues recently described Jack as ‘a stalwart, honest, and true gentleman.’ He is a son of the Prep who has directly impacted the changes through the years—as someone who has celebrated the 125th, 150th, and now the 175th anniversary of the Prep. As a man who embodies our mission of faith, scholarship, and service, Jack continues to inspire us to seek the magis in all things, to stretch our minds and hearts to serve our students as he has done over the past 50 years—with gratitude for all that has been and joyful hope for all that is to come. Jack has given us the gift of his friendship in the spirit that all we do together here on the Rose Hill campus is ultimately for the greater glory of God.

A member of the Prep’s Hall of Honor, Jack is a recipient of a double Bene Merenti medal, a Maroon Key and the University’s President’s Award. When he was acknowledged by the Order of the Maroon Key in June 1970, the end of his third year teaching at the Prep, the dedication remarks said the following: ‘dedication’ is the man’s theme song, a Prep alumnus who has brought back to his alma mater a warmth and depth of commitment which his students and colleagues deeply respect. … This man has not sought headlines or spotlights, has worked generously and selflessly to bring people together with respect for one another. He has clearly understood the emphasis of the Prep’s education, service to his fellowmen. We honor his integrity, his commitment and his selfless concern…’

46 years later, those words still stand true. For your selfless generosity, lifelong commitment, heartfelt compassion, and shared wisdom, we are truly blessed and privileged to share this mission and work with you, Jack. As a colleague and friend, you fill our days with companionship, love, and grace.” 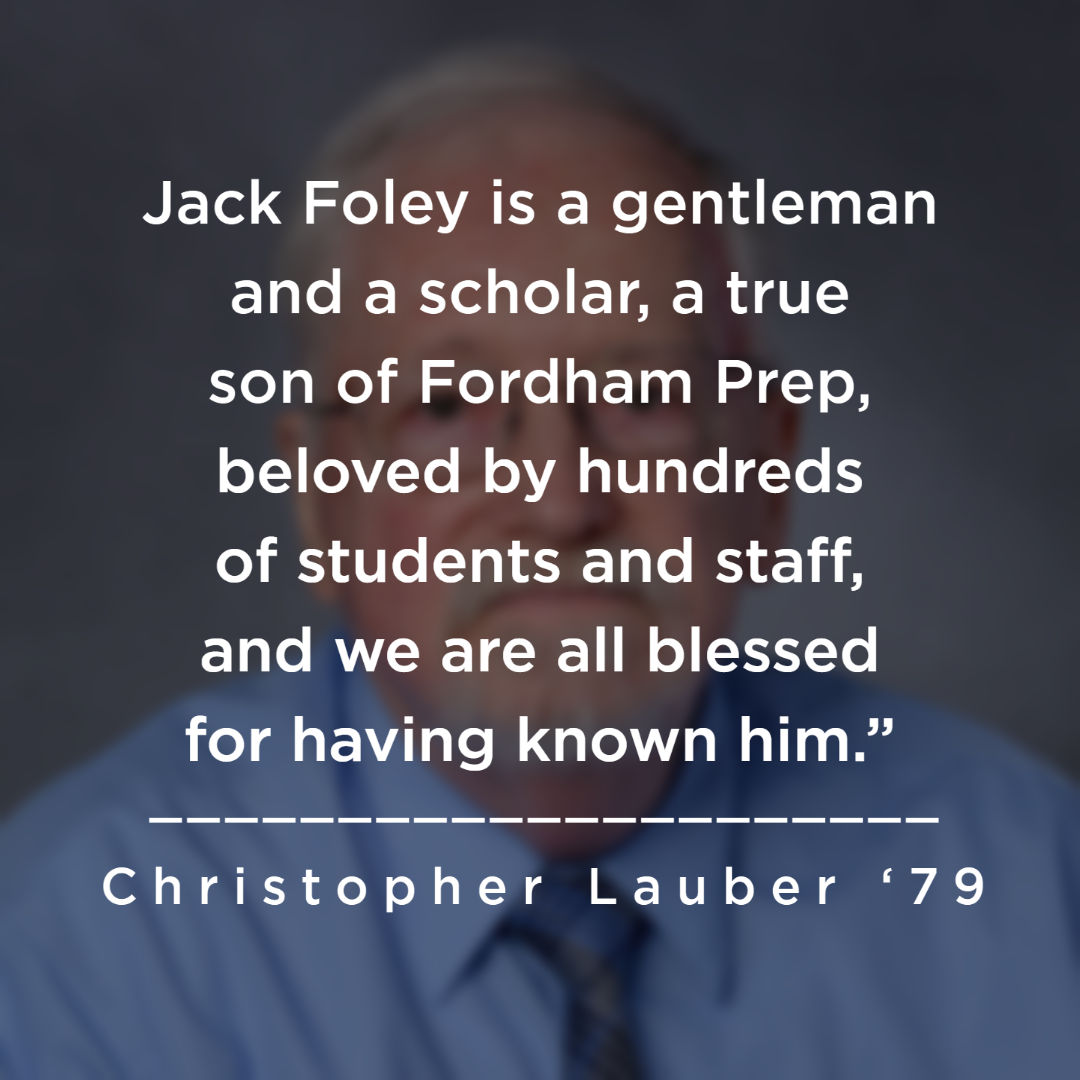 Thank you Mr. Foley for dedicating your life to Fordham Prep’s mission of faith, scholarship, and service and for helping to form so many generations of “men for others.”

If you would like to submit a tribute or your best wishes for Mr. Foley, please send an email to engagement@fordhamprep.org and use the subject "Mr. Foley Tribute".