<Back to News
Fordham Prep Seniors Make Their College Choices 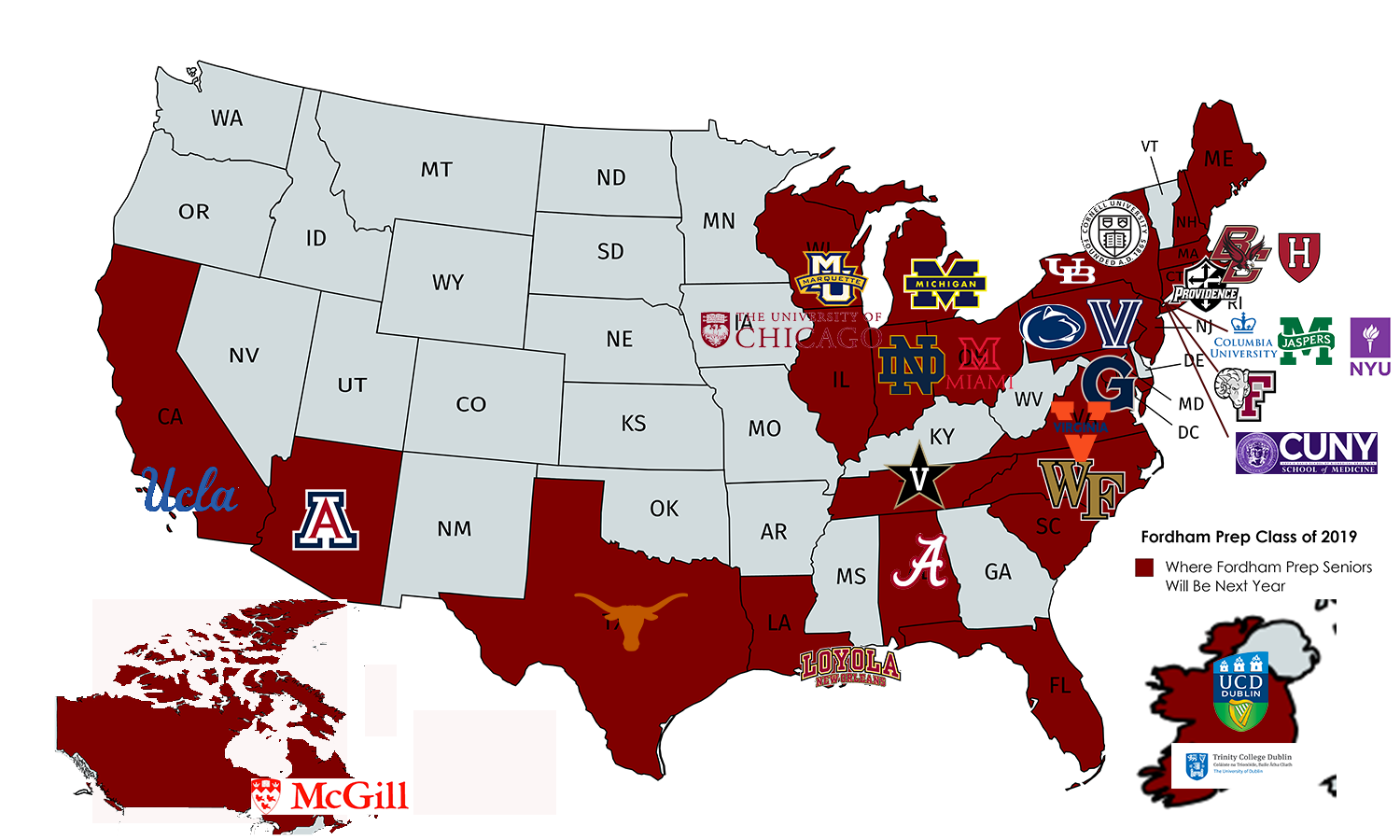 (Click on the map to see the full size version)

On May 1, Fordham Prep seniors officially announced where they will be headed in this fall. For some, it will be right across the Prep at Fordham University. For others, they will make a life-changing move to other countries to start their college journey.

"The Class of 2019 has set themselves apart with the geographical diversity of their college choices," says Director of College Counseling Maura Brennan. "This year's class is headed to 25 different states and two countries."

The 238-member senior class will be spread out from New York to California, across the northern border into Canada and across the Atlantic Ocean in Ireland, attending 94 different schools. The largest contingent of Rams, 20 in all, will head up I-95 to Chestnut Hill to attend Boston College in the fall.

One of those headed to Boston College is senior Jackson Goodman. The Eastchester native says, "The college application process was stressful, but I found that it was more about being willing to commit yourself to writing the essays and putting in the work more than anything else. The counseling department was helpful in providing information about the process and helping to identify schools which I should consider."

When asked about his experience at Fordham Prep, Jackson replied, "My Fordham Prep experience is honestly one that has meant the world to me. I’ve met so many incredible people and formed close relationships with both teachers and students which I know will last a lifetime. Being a part of this community is truly like being a part of a family, and the sense of brotherhood here at the Prep is unlike anything else I’ve ever been a part of. I’ve been challenged academically, athletically, and socially, but I believe all of those opportunities to grow have made me a better person, and I look forward to being able to use what Fordham Prep has taught me to continue to grow in college."

A group of 14 Rams will be headed across the Bronx to Manhattan College which is where Taeef Jihaan will be going in the fall. When asked about his college application experience, he said, "It was a stressful process, but mainly because I did a lot of things last minute. Mr. (TJ) O'Sullivan ('98) was firm about the deadlines and the requirements which helped." The Bronx native intends to study chemical engineering as a Jasper.

New Rochelle resident Raphael Bartolome will be attending Sophie Davis CUNY School of Medicine BS/MD program which will put him on track to become a doctor in seven years. His application process was a bit different since Sophie Davis does not participate in the Common Application. "I had to write three essays: one on extracurriculars, another on an important national health or social policy problem, and finally a 'Why Medicine Essay.' I wrote about my love of music, the rising rate of obesity in the United States and steps we can take to address it, and my weight-loss journey and how I wanted to become a doctor so I can share my story with other kids who might have had the same problems as I had. We also had a three interview stages with a student and two professors. I simply kept it lighthearted and straightforward about how I felt about my experiences-I left everything genuine on the table."
While Raphael didn't hear back for an interview until late March, he was kept on track by his counselor, TJ O'Sullivan: " I had a couple of moments where I had to sit down with Mr. O'Sullivan and talk about my fears, and the most important thing he told me to do was just wait and let everything come to pass before being nervous about anything. It really helped me realize that everything was going to be alright and that even if I was rejected, it wouldn't get in the way of my dream of becoming a doctor."
One Ram will make the journey north of the border as he attends McGill University in Montreal, Canada. Larchmont native James Carcano intends to study mechanical engineering with a minor in environmental engineering. He credits the Common Application and his college counselor for making application process to the vast majority of his schools simple. While McGill is not on the Common Application and all materials were sent by international mail, he is happy with his choice and hopes to take in the culture and opportunities available in Montreal.
Almost 44.5% of the entire senior class will be attending a Catholic college or university. Over 28% of the Fordham Prep Class of 2019 will be attending a Jesuit college or university, including Georgetown, Holy Cross, and Marquette. Nearly 16.5% of the class will be headed to other Catholic universities around the United States, such as Notre Dame, Providence, and Villanova.
Private (non-Catholic) colleges make up the next group of Fordham Prep students with nearly 26.9% of the class headed to schools like Columbia, Cornell, Harvard, NYU, Elon, the University of Chicago, and Vanderbilt. Public in-state and out of state schools total almost 26% of the graduating class, with students matriculating to schools like the University of Texas, the University of Michigan, the University of Virginia, UCLA, Binghampton University, and the University at Buffalo.
Three students are going international with one to Cananda (McGill) and two to Ireland (Trinity College and University College, both in Dublin).
Congratulations to the Fordham Prep Class of 2019 on their future endeavors! They will officially graduate from the Prep on Wednesday, May 29 from the Lombardi Center on the campus of Fordham University.

(Click on the chart to see the full size version)