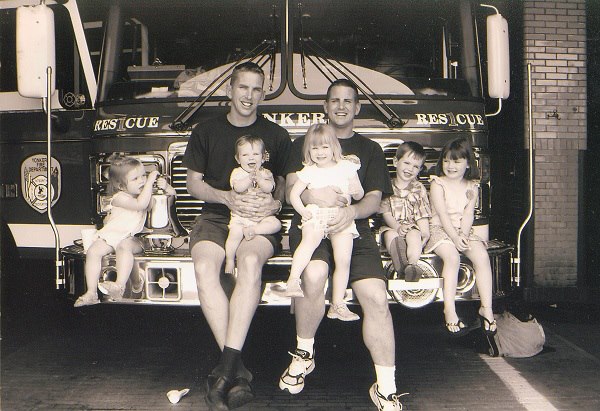 On October 2, 2009, Patrick S. Joyce, Jr. ’88, a Yonkers firefighter, tragically died in the line of duty. His leadership and sacrifice inspired the Class of 1987 in their journey as as men for others. According to Yonkers Fire Commissioner, Anthony Pagano:

Patrick Joyce feared nothing. He gave his life on a report to rescue others. His ﬁrst decision was to enter a room that was superheated and smoky because there was a report of people trapped. When these things happen, they happen within seconds and you don’t have much time to make decisions. Fireﬁghter Patrick Joyce was one who never hesitated.”

Inspired by his selﬂess act of heroism, ten thousand people attended his wake and funeral. There could be no better example of serving as “a man for others”—which is the goal of a Fordham Prep education. Conversations followed, beginning with the Joyce family, and then including Class of 1987 representatives, the Fordham Prep Board and school administration. Together they fostered an effort to support the school’s long-term mission of educating leaders in the Bronx and surrounding metropolitan area, regardless of means.

Patrick Joyce’s own Class of 1988 joined the combined dialogue, followed by the Class of 1989. Working together, small numbers became large. The decision was made to launch the Class of 1987 Endowment at the 25th Reunion in April, 2012, which became the most well-attended reunion in Prep history. This permanent pool of capital would fund need-based ﬁnancial aid for qualiﬁed students of modest means; the assistance would be awarded as "Patrick S. Joyce, Jr. ’88 Scholarships.” Fordham Prep would ensure that his heroic example would always remain a living memory. Momentum inspired 57% of the Class of 1987 to commit to this effort. Patrick Joyce’s Class of 1988 surpassed many of these statistical measures, breaking the 25th Reunion mates to join the $500,000 Class of 1988 Endowment which also funded Patrick S. Joyce, Jr. ’88 Scholarships. The impact of the resulting ﬁnancial aid could not, however, be described simply by the numbers: for these awards were changing lives by offering access to a Fordham Prep education that otherwise would not exist. A new generation of students would have the opportunity for formation, to create the type of enduring bond that linked the Class of 1987 to each other, and beyond.

The Class of 1988 Endowment likewise was launched in memory of George A. Coleman '88 and Joel A. Harris '88.

The Class of 1989 Endowment was launched in memory of Victor Boissiere '89, Joseph O'Grady '89, and Dewayne Williams '89.
Our Prep. Our community. Our story.
The following individuals and organizations have made a commitment to support the Patrick S. Joyce Scholarships:

The Society of the Friendly Sons of Saint Patrick*

The Society of the Friendly Sons of Saint Patrick*