Established in 1985 by Cecilia Augustine to honor close friend, Malcolm Wilson, and augmented in 2000 by Dr. and Mrs. John Conroy, this fund increases access to Fordham Prep for students from modest means. Wilson was a Fordham Prep, College and Law School graduate who, after service in World War II, was a longtime New York State Assemblyman, Lieutenant Governor and Governor of New York State. He was instrumental in helping Fordham Prep reduce its burdensome debt in the mid-1970s. 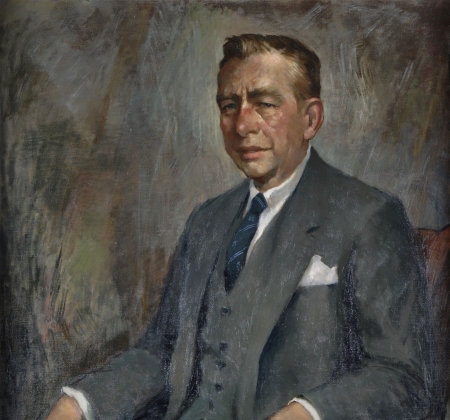 Charles Malcolm Wilson was born in 1914 in New York City to Charles Wilson and Agnes Egan Wilson. Charles, Sr. was a distinguished patent attorney. Both he and Agnes, who had grown up a farm girl and become active in the Women’s Suffrage Movement, were community organizers and Republican Party leaders, involved in local and state politics in Yonkers, New York where the family would settle in 1920. With his middle name as his main moniker from a very early age, Mal grew up on Wendover Road together with two sisters, Agnes Irene and Mary Jane, as well as a younger brother, Donald, Prep Class of 1935.

Malcolm Wilson began his grammar school training at Manhattan’s St. Thomas Academy, finishing at the Elizabeth Seton Academy after his family moved to Westchester. A bit of a prodigy, Malcolm was only 11 when he entered the Prep, graduating at age 15 — one of the youngest to graduate in school history. During his Hughes Hall years, young Wilson debated, managed the golf team, oversaw student-run charities, and was active in various facets of the spiritual life of the school.

Moreover, he would leave his mark on school history as one of the founding members of the “year book” — in those days written as two words. The Prep’s yearbook, The Ramkin, was first published in 1929 and has been produced annually ever since.

As once recalled by Prep track legend Joe Fox, a fellow ‘29er and Hall of Honor inductee, even during their Prep days, “there was a generally held feeling that Wilson would hold a career in politics.” But then again, what else should they have expected from the boy who proudly wore his Hoover button to school throughout the 1928 campaign season.

In 1933, at age 19, Wilson received his bachelor’s degree from Fordham College, graduating from Fordham Law School three years later when he was just 22 years old. He embarked on a career with Kent, Hazzard, Jaeger, Greer, Wilson & Fay of White Plains, the firm where he would spend his entire practice. Politics would soon come knocking, and the suffragette’s son did not hesitate to answer its call.

C. Malcolm Wilson was elected to the State Assembly at age 24. According to the New York Times, the ever eloquent assemblyman credited his experience on the Fordham debate teams — he had debated at both the Prep and the College — with his good record of getting legislation passed. When World War II broke out, Wilson enlisted in the Navy but was nonetheless re-elected to his Assembly seat while overseas.

On the morning of September 6, 1941, the Assemblyman married Katharine “Kay” McCloskey of Riverdale, a Manhattanville alumna who had also studied at Julliard. Not surprisingly, the future first lady of New York would be known for her support of the arts throughout her public life, the performing arts in particular. She would also become an advocate for visiting nursing and home health care. Mal and Kay would raise two daughters, Katharine and Anne. Despite the demands of a life in politics, the Wilsons strove to maintain a private, stable, and Catholic home life. By the reckoning of all who knew them well, they certainly succeeded.

In 1958, Malcolm Wilson was elected lieutenant governor of New York State on Nelson Rockefeller’s ticket and held that office for 15 years until Rockefeller resigned in 1973 to become Ford's vice president. As New York’s 50th governor, the Honorable Malcolm Wilson would serve out the remaining year of his predecessor’s term. Losing his own bid for the governorship in the 1974, Wilson returned to Yonkers and his White Plains law firm. In his post-gubernatorial years, Wilson would also serve as chairman of the board and CEO of the Manhattan Bank for Savings until 1986.

From Yonkers to Albany and back again, Mal never forgot his Rose Hill days, and remained a loyal son of Fordham all his days. A 1974 article in the Ogdensburg Diocese North County Catholic sums up Wilson’s enduring devotion to his alma mater:

Proud of his Fordham ties and degrees, Mr. Wilson has served the University as one of the first 15 non-Jesuits to be elected to the Board of Trustees in 1969 as well as supporting alumni fund efforts for the school. At Fordham Prep, he is known as the man who took on the chairmanship of the school's building fund campaign that enabled them to move from a century-old building to a modern complex on the Bronx campus.

The truth is, however, that Wilson did more than just help the Prep “move to a new modern complex.” He and fellow Hall of Honor inductees Robert Abplanalp and Gerald McNamara are rightfully numbered among those who helped the Prep survive during the tenuous years of the late 1960s and early 1970s. Without their efforts, the Prep would not only have never made the move to Shea Hall, but would have surely closed it doors forever, becoming a footnote in Fordham history.