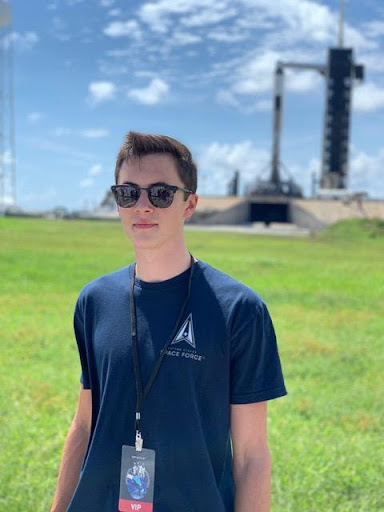 Reilly in Cape Canaveral, FL for the launch of the Inspiration4 civilian mission.
It’s not every day that you get invited to watch the launch of the first ever all-civilian spaceflight in Cape Canaveral, FL. However, that day came for Fordham Prep senior Charles Reilly during the summer of his senior year.
It all started with St. Jude Children's Research Hospital. Reilly was no stranger to St. Jude’s fundraisers, as his mom was already involved with the organization. When his mom told him about the work St. Jude does to help children, he thought to himself, “How could I just sit around and watch Netflix all summer when I could do something more meaningful?”
During his first year, he raised $11,000 for St. Jude. He continued to raise money every summer after that.
In 2021, Reilly was selected to be a part of the St. Jude Leadership Society for their inaugural year. Each student in the program is given a fundraising goal of $2,500.
“Charlie has a very unique drive,” said his supervisor Nicole Conaway. “He set his sights higher initially.” At first, Reilly wanted to be the top high schooler in New York, but it didn’t take long for him to covet the number one spot in the country.
By the start of his senior year, Reilly raised a total of $67,000, making him the top high schooler in the nation to raise money for the organization. “I really had no idea I was capable of doing that,” he said.

His strategies included door-to-door fundraising, sending out email blasts to the Fordham Prep community, and printing flyers to give out to people at the train station. Reilly was surprised as he began to see unfamiliar names on his donations list giving amounts as high as $500 to the cause. Other students in the program began asking him for advice.

One day during the summer, Conaway called Reilly’s mom to ask if he could have permission to fly out to Florida for a VIP all-expense paid trip to see the launch of SpaceX’s civilian mission, as St. Jude is the charitable beneficiary of Inspiration4. Reilly, who was catching up on summer homework at the time, was speechless.

“She told me that a billionaire [Jared Isaacman] who is going to space is paying for me to go down to Cape Canaveral. I was like, ‘I don’t even know this man!’” Reilly recalls. However, Isaacman definitely knew of him and all the work he had done to raise money for St. Jude.

Reilly made the trip in September.  His teachers were more than happy to let him take a few days away from his schoolwork, as this was a once in a lifetime opportunity.

The day before the launch, he was so excited that he couldn’t sleep. During the trip, he met fellow high school fundraiser Kayla Anderson, whose father is also in the space force, and U.S. Space Force brigadier general Stephen G. Purdy Jr. There was also a meet and greet with the crew. 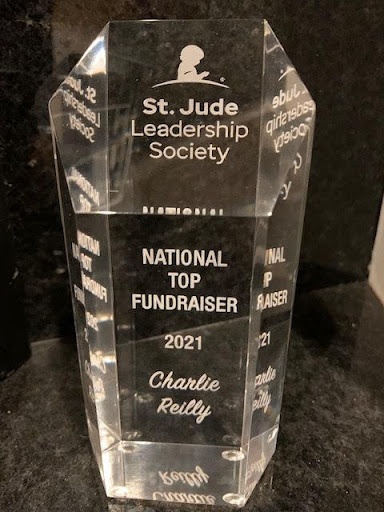 Reilly received an award for being the top national fundraiser for St. Jude.

“I was just a kid from New York. I didn’t think I deserved any of this,” Reilly said. “I talked to General Purdy for about an hour, maybe more. My mom said it was a lot more than an hour but it felt like just 30 minutes,” he continued. “We talked about what my career could be like in the U.S. Space Force—I’m only 17 and I was talking about what my career would be like in 20 years!” 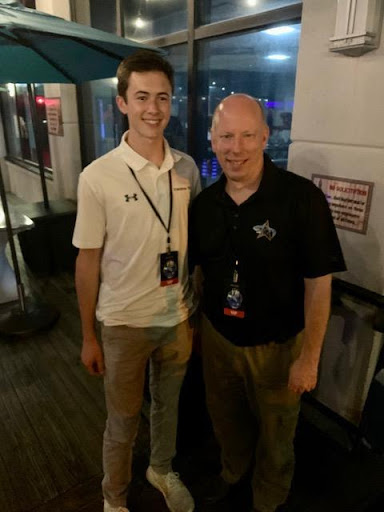 As a Fordham Prep student, Reilly is required to participate in service projects during each of his four years.  In his freshman and sophomore years, he completed group projects. As a junior and senior, he is required to perform a set number of hours. The program also includes a dedicated service class in senior year during which students reflect upon their experiences and share them with others.

The service experience at the Prep taught Reilly the importance of being a man for others, one of the core tenets of Jesuit education. “It does feel good to help others,” he said.